When Donald Trump won the 2016 US election, pundits predicted a populist backlash against past decades of fiscally and culturally liberal policies. Porous borders, terrorist threats and the decline of the manufacturing industry were blamed for the emergence of populism. However, 6 months after the inauguration of Donald Trump, the world -especially Europe – has experienced what I would call a liberal backlash rather than a populist backlash.

In the following article, I will endeavour to explain why Donald Trump is unintentionally promoting a liberal and cosmopolitan agenda rather than his own populist agenda.

The idea first struck me in December when political latecomer, Alexander Van Der Bellen, defeated populist Norbert Hofer in the second ballot of the Austrian election. The first election was held in May with only an insignificant margin separating the two candidates. In the re-election, however, Van Der Bellen triumphed with a margin of approximately 8 percentage points.

In other parts of Europe, pundits dreaded the prospects of candidates like Marine Le Pen and Geert Wilders being successful in their respective elections. Although both candidates did perform very well in polls months before the elections, their support declined severely as election day approached. In Netherlands, the support for Geert Wilders’ party amounted to about 22% in polls. However, his support decreased dramatically – hitting only 13,1% at election day: 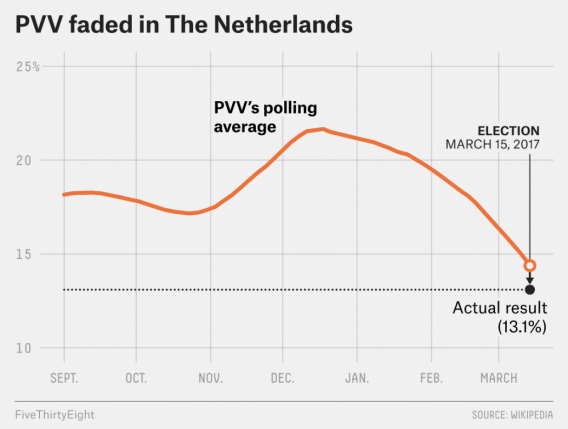 Additionally, in the subsequent French elections Marine Le Pen was expected to gain ground in polls. However, as election day approached, her support declined:

The same trend applies in the 2017 UK election in which UKIP support collapsed, falling numerous percentages. After reaching its peak popularity in polls, the German populist party, AfD also seems to have lost favour from the electorate – nonetheless, we still anticipate the elections in September with great excitement.

It is not only in elections that Trump seems to have ignited a counter-reaction. Another way to examine this tendency is by looking at polls measuring the development in opinions from year to year. I find it striking that favourability ratings for free trade and NATO – which Trump is not particularly fond of – have increased. For instance, Trump spent lengths expressing his discomfort with trade deals and NATO – therefore, It is intriguing that perceptions of free trade and NATO have shifted towards a more liberal view among the respondents:

What’s more interesting is that favourability ratings have increased following a period of long time pessimism. In other words, the zero-zum perceptions have been substituted with a liberal and positive-sum perception of the economy. During his campaign, Trump also questioned the necessity of NATO. In a resentful manner, he threatened that USA might not comply with the musketeer oath. But, as the figure below suggests, the favourability ratings of NATO increased after a long period of decline – even in semi-authoritarian and populist countries like Poland: 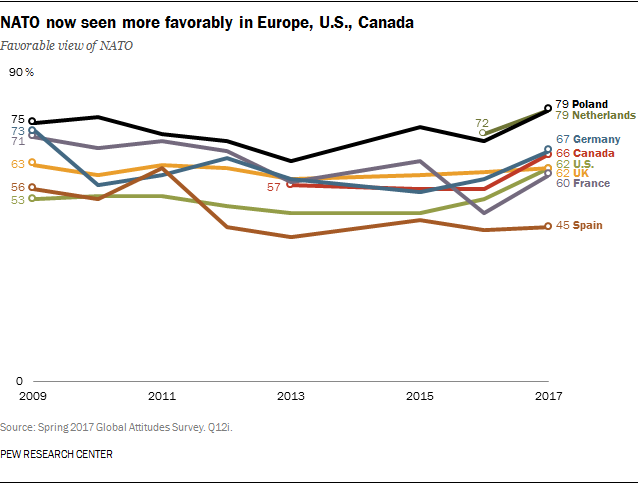 The evidence presented above suggests that the election of Trump has ignited a counter-reaction. The statistics above are only a fraction of polls and election results supporting this thesis.

Nevertheless, in the above, I have presented compelling evidence suggesting that Trump has mobilised a backlash. In other words, Trump seems to have promoted liberal values and policies.

The German philosopher, Georg Wilhelm Friedrich Hegel wrote about a theory of pendulum. In short, according to Hegel, contradiction is at the core of human progress. The idea is that contradicting positions are being resolved into a new position. This way, the “pendulum” swings between thesis and antithesis, and eventually develops into a third position.

Hegelian philosophy seems far away from Trump. However, as mentioned in the introduction, the Western world has been dominated primarily by fiscally and culturally liberal reforms since the fall of the Soviet Union. Albeit this policy had great support in the first decades following the fall of Soviet Union public sentiment shifted within the 21st century. For years, political pessimism thrived in certain regions, which eventually led to the emergence of political movements agitating for nationalist and semi-authoritarian policies.

This created fertile political ground for the emergence of the populist movement which eventually culminated with the election of Trump. As this radical and populist movement formed, the evidence suggests that the pendulum has swung in both directions and is now stabilising in the middle. In other words, the pendulum has stabilised in a position between two contradictions (liberalism/populism) and has now settled in a position in the middle.

Fillip Steffensen is a Danish blogger and contributing writer at The Conversation Room.

2 thoughts on “Is Donald Trump unintentionally promoting a liberal agenda In Europe?”